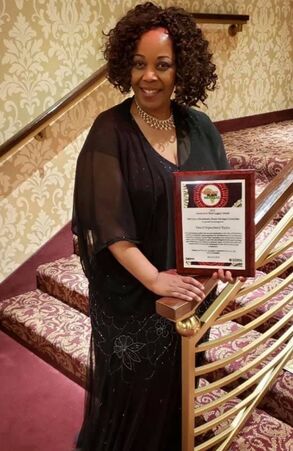 In January and February of 2019 Sara was humbled to be recognized with two prestigious community awards:
Athena Finalist and Gloria Avis Legacy Award.
Sara (Chipembere) Taylor is the Founding President and Chief Executive Officer of Positive Steps and  Managing Director of Taylor-Jones Event Management Services.  Sara’s 24-year career in nonprofit services range from direct care front line social worker to senior level administrator. Sara has extensive experience providing leadership development training and capacity building services to small nonprofit and faith-based organizations as well as managing professional conferences throughout North America.
Sara is nationally known for her ability to “convene and influence groups” in the streets, within various communities, institutions, pews and in board rooms. Sara’s belief and philosophy is that everyone has “potential” and the ability to make their vision happen by tapping into that “light of hope and understanding their purpose” which is often over-showed by darkness: past experience, negative surroundings, distractions and self-doubt.

At the age of 16, Sara became a teen mother while already living in a household stricken by poverty. Her entire career has focused on empowering and motivating individuals living in poverty or faced with barriers and circumstances which often keep people trapped on public assistance or content with a way of life that often causes one to live beneath their privilege.  Sara's influence and credibility is also seen in her work as a community leader working with policy makers, philanthropist and other stakeholders who are collectively dedicated to improving outcomes for vulnerable populations.

Sara was born and raised outside of Pittsburgh, PA and moved to Rochester, NY directly after high school. Sara was raised by her mother Helen Taylor and as a teenager welcomed her biological father John P. Chipembere into her life. Mr. Chipembere was a native of Malawi Africa and spent more than 30 years working for New York State before returning to Malawi where he died in 2016. Sara has one biological son, Darwin C. Jones, daughter in law, Shalon and two beautiful grandchildren Jaxon and Zara.  In 2009 Sara became the caregiver of her great niece Ariana and has since been raising her as her own.
​
Sara obtained her Master’s Degree in Human Service Administration from St. John Fisher College, Rochester NY. She has received various certificates in leadership development. Sara completed several ministry and theology training courses and holds ministerial licenses. She serves on numerous advisory boards and steering committees at local, state and national levels. She has received extensive training in conference and meeting planning.  Sara believes that “professional, personal and spiritual development is a lifelong process with no ending point”.
Darwin C. Jones

Darwin C. Jones is a seasoned CPA with Master's Degree in Taxation.  He has extensive experience in Nonprofit fiscal management, Merge and Acquisition and Fiscal controls. Darwin spent more than 10 years on Wall Street and currently teaches accounting and tax compliance at Universities in New York and New Jersey.  Darwin has also served as interim chief financial officer for various nonprofit organizations in addition to offering an array of accounting services and facilitating training for both management teams and board of directors.  Darwin is married to Dr. Shalon Jones who is a Pharmacist specializing in research and health disparities. Together they have two small children, Jaxon and Zara and believe that their faith will guide them to their God given Destiny.